A day (or night) out fishing in the Bay of Islands will push the same buttons in you today that toy shops and ice cream sundaes pressed as a child, whether you’re an experienced or a novice fisher. Truly a fisherman’s paradise, the sheltered waters of this world class fishing charter destination are abundant with healthy fisheries all year round. 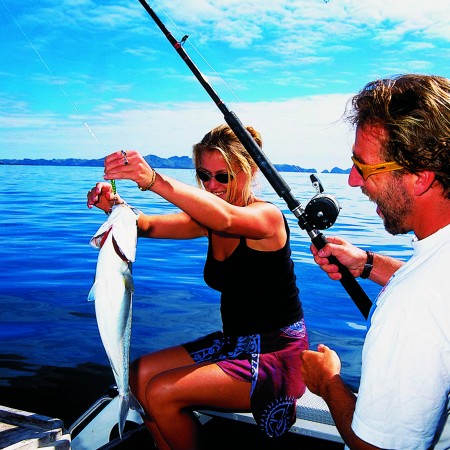 Fishing in the Bay of Islands is a great way to get out on the water!

Most famous for its renowned snapper fisheries, we are proud to say we hold all National and World records for Snapper, Yellowtail Kingfish and Striped Marlin on this coastline. Other thriving species here include Tuna, Trevally, Hapuku, Tarakihi, Kahawai, Scallops, Oysters and Mussels. The Bay of Islands also holds many Game Fishing records.

The Bay of Islands’ most Snapper-rich regions can be found between Red Head to the Ninepin and Roberton Island to Capstan Rock. The Brampton Reef, Black Rocks, Albert Channel and Cape Brett are also certainly worthy of a trip.

Once you have settled on your chosen spot, laying a berley trail with live, bleeding fresh bait, before stray-lining with whole mackerel or pilchard squid baits, will give you the best chance of scoring a trophy catch. If you are new to fishing, your charter skipper can give you the low-down on all the jargon, or you can simply let them take care of the finer details while you relax and fish as nature intended.

Snapper fisheries are found in our waters all year round, peaking between November and May. Snapper school begin to spawn in late Spring/early Summer so numbers are in high abundance in these months. Many charters operate Catch & Release on some of the bigger catch at this time of year. During Autumn, Snapper can sometimes also be found in shallow estuaries and from time to time even lurking in the mangroves.

Kingfishing in the Bay of Islands is not for the faint of heart, as New Zealand’s waters are home to some of the largest Yellowtail Kingfish in the world. Our stretch of coastline is a magnet for large fisheries of Kingfish, and this popular sport draws hoards of enthusiasts to our shores each year.

Cape Brett and Hanson’s Reef are the most notable Kingfishing spots in these parts, while Kingfish Reef, Bird and Onslow Rocks and Whale Rock to Red Head are all great locations too.

There are a number of charter boats in the Bay of Islands which specialise in targeting this species, predominantly using mechanical jigging, live baiting and salt fly. These fish are found in our waters all year round, but they tend to peak in Autumn and early Winter, which is a superb time of year to visit the Winterless North!

Most Light Tackle species’ seasons are year round, but different fish are more abundant in different months. Hapuku and Tarakihi are best targeted between June and October, while late summer to autumn are the hottest months for Kahawai and Tuna.

You are spoilt for choice with so many reputable and affordable fishing charters to choose between in the Bay of Islands, with prices starting in double figures. So even if you have no gear of your own and have never filleted a fish in your life, you can book your fishing trip today and be rest assured all the material and practical considerations will be taken care of.

If you have your own gear then the world is your oyster, with a number of consistent fisheries able to be targeted off Russell Wharf, Opua Wharf, Paihia Wharf and Waitangi Jetty. Or if Rock Fishing is more your thing, Marsden Cross, Whale Bay, Tapeka Point, the Waitangi Golf Course, Rawhiti, Oke Bay headlands and Cape Brett are all great places to set yourself up. Meanwhile, Rawhiti, Russell and Opua are fantastic kayak fishing spots, as well as a number of areas down the southern shore of the Kerikeri Inlet.

Whatever choice you make, we can promise you one thing. The day (or hopefully days, weeks, or even years!) you will spend fishing off our rugged, breathtaking coastline here in the Bay of Islands will be among the most enjoyable of your life.