Ipipiri – a historic map of the Bay of Islands 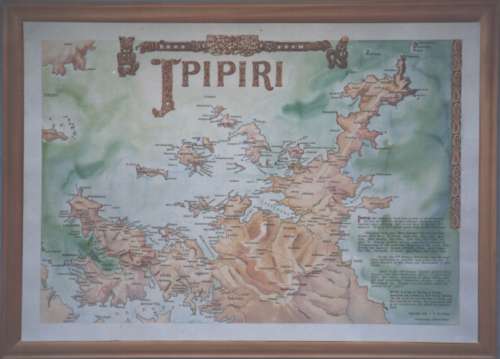 Place names come and go, but the land remains. An enquiry from a cousin about the name of one particular headland near his home in Manawaora Bay, Bay of Islands, started Murphy Shortland on a five year quest to record the pre-European names of the eastern Bay of Islands. The result is a map which he has called Ipipiri, a name used by the Maori to refer to what Captain Cook named the Bay of Islands.

When Murphy realised he did not know many other traditional names in the area besides that of the headland, he started to piece together a jigsaw of half-forgotten information. Most of the place names he has re-discovered have at least four separate provenances: Turton’s land claim deeds; old Lands and Survey maps; Land Court minutes; and the memories of local people. Murphy noted that many land sales in past years referred to boundaries, which were determined by looking at the land from the sea. “The land deeds name all the landmarks in succession as the eye moved. Nine times out of ten it appears the Maori sold their land from a boat, pointing at peaks, valleys and waterways.”

Murphy also used the whakapapa of local tribes to confirm information he extracted from Land Court minutes. This enabled him to identify chiefs who were selling particular pieces of land in specified areas. Along with the place and landmark names came information about associated events and people. Kaiwaka, a bay near Tapeka, was the site of a massacre between two local tribes in the 1800s. This incident had been recorded in Land Court minutes but forgotten by locals. But when the Moerewa freezing works were being extended in the 1940s, sand was taken from the beach and bones from the fight were uncovered. Not only the name of the beach, but also knowledge of the historical event had been almost lost.

The map reaches from Taupiri Bay in the south to Ngaiotonga, part of the Waikare Inlet, all of Te Wahapu, Kororareka, Okahu (Urupukapuka) Island and Motukokako (Piercy) Island in the north. The original of the map, drawn and painted by Denis Brown, is on long-term loan to Russell Museum, mounted in a frame of kauri hand-carved by Anita Jones of Motatau.