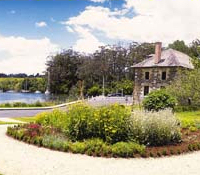 According to Maori Historians, Ngati-Miru, the people who first lived in the Kerikeri district, were attacked and driven away by a war party of Ngapuhi. Terraces are the visual evidence of the pa (fortified settlement) the Ngapuhi built, this area is now known as Kororipo (swirling waters). 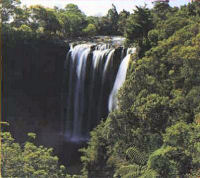 The first European settler were the missionaries: James Kemp, Francis Hall and John Butler. As well as teaching and preaching, they farmed and gardened. A chapel was built in 1824 which also served as a school. The Church Missionary Society bought 3000 acres from the Maori Chief Rewa in 1831. This is the land on which Kerikeri stands today. The Stone Store, New Zealands oldest stone building, replaced a wooden store in 1836. It was erected to provide fireproof storage, but was also partly used as a library by Bishop Selwyn from 1842-44 and became an ammunition magazine during the war with Hone Heke in 1845. The Stone Store was purchased by the Historic Places Trust in 1975 and has been restored to its former glory.

In 1927 the Alderton Group Settlement Scheme formed the beginning of a new era for Kerikeri. The North Auckland Land Development Corporation purchased 6817 acres and divided it into blocks for passion fruit and citrus orchards. This became the foundation of today’s horticultural industry – the backbone of Kerikeri’s local economy.